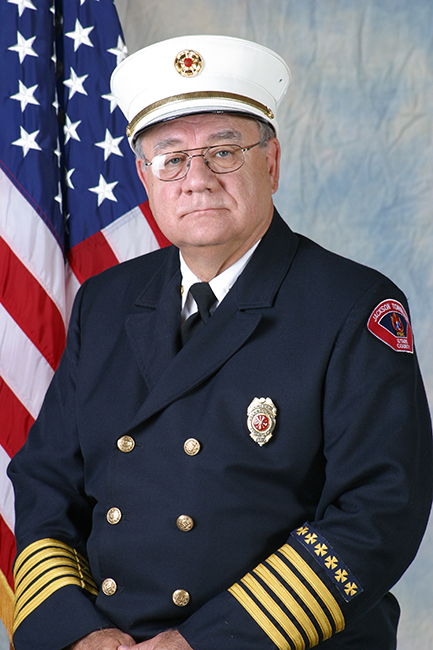 (North Canton, OH – May 27, 2020) – Former Jackson Township Fire Chief Ted Heck has been inducted into Stark State College’s 2020 Alumni Hall of Fame in recognition of his professional and community achievements.

Heck, who graduated with an associate degree in fire science in 1981, is a third-generation firefighter and a 44-year veteran of the fire service.

A graduate of New Philadelphia High School, he went on from Stark State College to earn a bachelor’s degree in business administration and economics plus a degree in secondary education from Malone University. He has served as an adjunct instructor in the fire science programs at Stark State for 35 years.

In 1974, he was among a trio of fire chiefs who approached Stark State’s then-president Fred Yenny to initiate the launch of the College’s associate degree in fire science. The endeavor was so successful that Stark State has become one of the premier fire/EMS training associate degree programs in the state.

Before Chief Heck’s retirement in 2011, the Jackson Fire Department grew from two volunteer fires stations to a roster of 72 career and 35 part-time firefighters/paramedics responding from five stations. He also was certified as a state fire service instructor. His numerous other roles have included chairman of the county hazmat committee and the Stark County Paramedic Council, operating a state-certified training program for EMS courses, and serving on the Stark State Fire Science Advisory Board, Jackson Community Improvement Corporation, Stark County IMAT Team, LEPC Executive Board, Stark County EMA, Jackson-Belden Chamber of Commerce, Jackson Port Authority and the legislative and publication committees of the Ohio Fire Chiefs’ Association. He currently serves in the Ohio Fire Chiefs Association’s testing and consulting services.

He received many awards throughout his professional life and has been an active member of the community. He enjoys traveling, camping and woodworking and he is a certified instrument-rated pilot with a high-performance endorsement. He has been married for 50 years to his wife, Kay, who is a retired elementary teacher. Their two sons have followed their father into public service – one is a lieutenant in law enforcement the other is an assistant fire chief/medic. They have six grandchildren.

(North Canton, OH – May 19, 2020) – Area residents who find themselves out of work or in an unstable employment environment can find a helping hand at Stark State College’s Career Services Office.

(North Canton, OH – May 18, 2020) – The community is invited to Stark State College’s 2020 spring virtual commencement ceremony to confer 734 associate degrees on May 24 at 2 p.m. The commencement brings the degrees awarded during the current academic year to 1,132.